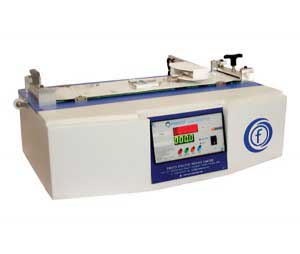 Plastic packaging is utilized in the market for packing wide variety of products, be it heavy or lightweight. Beside the fact, that heavy object do not break easily but they do can get damaged. And form this information we can assume that almost every packaged object are prone to a particular amount of damage if they get slipped and fall. The slipping of products which are packed using plastic are mostly common. This is because the plastic material have less amount of friction compared to that in paper or fibreboard material. Their rough structured surface delivers much more friction than any plastic material. To fix the friction of plastic films, it must be first measured with Co-efficient of Friction Tester and then required changes can be done for making it as per the demand.

The equipment will help in measuring the static and kinetic friction of plastic packaging films. The friction can be measured via specimen to specimen or specimen to glass and metal. The equipment is designed by following international test standards such as ASTM D618, ASTM D 883, BS 2782, and ASTM D 1894.  Among these ASTM D 1894 defines the test method as per which the static and kinetic friction can be calculated of plastic films and sheeting. The equipment is constructed of a mild steel material and externally applied a Powder coated finish and bright chrome/zinc plating for delivering corrosion resistance. This is important for having a long run performance of the instrument without worrying about its servicing all the time.

An SS block slider is installed in the machine which is used to drag the specimen material over the other material. The specimen film is sliced and covered on the block for sliding over glass, metal or the specimen sheet itself. A load cell is equipped for uniform distribution of force applied on the sliding process. It is very important that the sliding friction is well spread throughout the surface while testing or uneven friction will be recorded which will not be accurate as required. The numerical force values are recorded via digital unit of the machine. The indicator system is based upon a microprocessor program which precisely measures the value of friction applied at the time of sliding. Easy to clamp fixtures are used in the machine for having a smooth testing experience. Considered to be a best fit equipment to measure the friction value of plastic films.

How to Gauge the Effect of Environmental...

How to Measure Color Quality of Textiles...