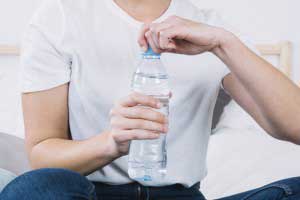 Caps and closure have an important role in bottle packaging industry. There are various test processes that decide their quality as per customer demand. Torque test is one of them. However, conducting the test using a precision equipment makes all the difference.

Cap torque tester is a bottle cap testing instrument. It is used to evaluate the minimum amount of torque applied to open or close the cap. The test values are shown on the display screen in digital format. The display screen work using a microprocessor based unit. It is also equipped with LED light source. User can set the zero or tare value for the test and peak value can also be recorded. There are four anti-slip grips which is used to grab the bottle sample in between tightly. Slight slippage can lead to faulty test reports.

In-built calibration feature allow the user to set test equipment as per their company testing standards. Torque value is measured to precise decimals with torque sensors. The specimen clamps are adjustable for different size and shapes of bottles. Up to 9 sample readings can be recorded in one go. Safety lock allotted in the machine to avoid noting the additional torque.

To initiate the Bottle Cap torque test, the specimen bottle is first clamped nicely using the grips. Operator can very careful apply opening force on the closure and see a value recorded on screen – this would be the opening torque and similarly a closing torque can be evaluated.

Get Testing Equipment For Checking The R...

Use Peel Strength Testing Machine for Me...

An Effective Strain Measurement With Pet...

Perform Torque Test for Plastic Cap of B...