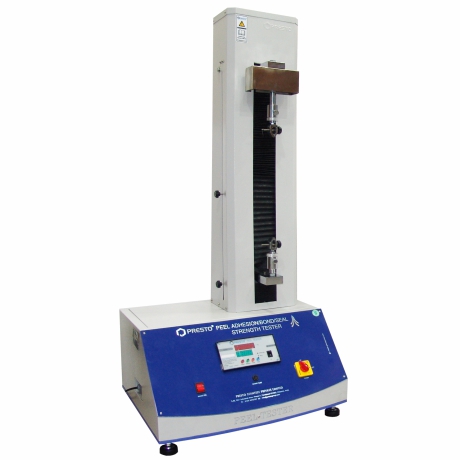 Peel strength tester is one of the best methods that is used in the industries for analyzing the strength and efficiency of the adhesives that are used for packaging of different products. The test method is best for ensuring that the adhesive is best for a particular application or not. The test procedure is performed with the help of a testing instrument called peel strength tester. The instrument offers the most accurate analysis of the strength of the adhesives used in industries.

The T-peel test is a certain type of tensile test which is used for testing the force required for separating the two flexible adhesives bonded together. In this type of test, the specimen is prepared with two open ends. The two ends are fixed in the grips. After that, the grips are moved away from each other. When the grips are separated, the substrates are peeled off from each other. The load cell of the instruments measures the force that is applied to the substrates.

In the 900 Peel test, the test specimen is placed on a rigid substrate, and the open end of the adhesive is placed in the grip. After that, the grip is separated apart. This causes the adhesives to peel off from the substrate to which it is applied. The load cell present in the instrument measures the amount of load applied to the adhesive. In this test methods, the force applied is perpendicular to the direction of the peeling of the adhesive.

The Peel strength tester offered by Presto is a highly advanced testing instrument that is used in different industries for testing the efficiency of the adhesives with great accuracy and precious.

Test The Compression Strength Of Fruits ...

View The Strains In The Quality Of Prefo...

Check Readability of Labels by Testing I...

Why testing of labels is important in pa...

Get Easy Operation & Precision in Soda B...

Ascertain the Strength of Linerboards an...

Give Best Safety To Pet Bottles By Measu...

Use Peel Strength Testing Machine for Me...