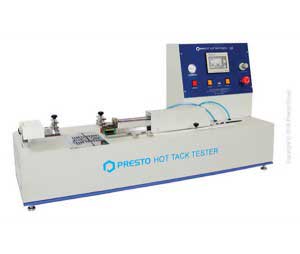 Hot tack is the heat seal strength which is constructed soon after the hot sealing procedure and prior to its cooling down to the normal temperature. The hot tack tester is utilized to evaluate the heat seal strength built between two packaging surfaces. This property of packaging material is vital and demanded to be tested as low quality hot seals create issues in the vertical form-fill-seal packaging industry. In the production line, the contents are dropped into the bag soon after the horizontal seal bars have opened. As the content loaded inside may have a heavy weight, the hot seal of the packages must be strong enough to withstand the high loads, thus requiring a high-quality hot tack testing.

With increasing demand for flexible plastic pouches in food, medical and pharmaceutical industries, the heat seal strength of the plastic pouches became highly important to the manufacturers. It is considered for providing content protection, shelf-life guarantee, and good outside appearance etc.

How to test the hot tack strength?

In order to test the heat seal strength of plastic packaging material, first, clamp the two ends of the testing sample using the static jaw and dynamic jaw. The driver starts moving the dynamic jaw producing relative movement. The machine will electronically record the signal from the load cell after the sample is damaged by the exerted force. Testing data can be extracted after analysis. The testing machine is utilized for evaluating flexible and semi-rigid packaging materials or pipe materials. Also, it is used for the testing peel, shear, tension and other properties of adhesives, adhesive tape, laminated film, plastic film, paper and other flexible materials. It combines all the testing functions of hot tack, hot seal, peeling and tensile resistance in one which proves to be efficient and economic.

For more technical details about the testing instrument or to get a quote, kindly reach out to our experts.

Is Your Metal Products Corrosion Free?...

Significance of Box Compression Tester i...

How to Evaluate Seal Integrity with Vacu...

Quality Is The Best Business Plan...